Even vacations seem to get harder every year. The pattern is either (a) just as I approach the vacation dates, I get ill and spend the vacation under the weather; or (b) a pattern of euphoria, dismay at spousal and offsprings' demands, the personal Block that works to keep me inert, frustration boils, rage bubbles - though seen to be irrational and counter-productive, a calming down, acceptance, a few tasks done, some time wasted utterly, some time spent pleasantly. After that, it's back to work and I'm all charged up and feeling energetic - bleh - for about four hours, and then the normal inhibitions or distractions get to work on me.....
When I was young and my testosterone was up, I was tied in knots; now that some of these are untangled, I'm slower and less moved to ... move. Deng ni-gaw fai!
Posted by Old Mr. Still Struggling with Ceaseless Chaos at 4:23 PM No comments: 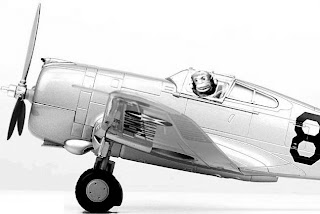 Quod ego stultior, I have many absurd pleasures that I do not do without, even though any Stoic teacher would choose the fact of any or all of these to morally lacerate me with. But in the end, I think he would have to chase me out of his stoa, since part of my duty to God is to be what he handed me, and that seems to NOT be someone who delights in his own superiority....

Whatever. And now to the realm of indifferentia:

I recently got lucky on Ebay - a $70 diecast model of a Curtiss P-36 Hawk (the immediate forerunner of the stalwart P-40 Tomahawk) for a mere $6. Woo-hoo! Even though the shipping for the heavy little fellow came to $11 or so, it was still a tremendous bit of luck. When I received it, I was amazed at the fine detailing! I have a few other diecasts, and some of them are pretty puerile in the attention to form and detail - but not this terrific, hefty little 'Carousel 1' model. Beautiful. The Carousel 1 line (Carousel is now, of course, defunct) were beautiful pieces. Of course, I could NEVER afford them at their $70 each list prices. But Chaos/Fortune/the-pointless-aether tossed at least one my way.

Of course, then I got greedy and went after another "deal" that I spotted - or, rather, mis-spotted: a 'diecast' (as I thought) of a Ki-61 Hien, the beautiful 'Japanese Bf109' (aka 'the Tony' in American plane-spotter parlance). Well, I got that too, and it's very nice, but it's entirely plastic - looks good, but it has no heft at all and does not rise of the level of detail of the P-36. Still, I'm glad I got it - there's little harm in it for $22 total - and it's beautiful among my others. Had to move SuperCar to make room for it!

The Decent Man vs. the Successful Man

Just listening to a reading of the Odyssey, and at that point where Telemachus has spoken to the general assembly, and Antinous has counter-attacked, blaming Penelope for the fact that he and the other suitors are eating, drinking, leeching and fucking the help to the continual detriment of her and Telemachus, it occurred to me - as it should - that Antinous is yet another asshole, following the foul inspiration that Nature often gives man & beast, to wit, to blame the victim.

So many people are focused on their goals only and fail to even consider something like moderation or respect or good acts. But their greed is also their particular virtue. Nature likes them, because they are heartlessly dynamic, just like her.
Posted by Old Mr. Still Struggling with Ceaseless Chaos at 5:06 PM No comments:

I've begun James P. Carse's book, The Religious Case Against Belief, which is a critique of the identification of the notion of Religion (or mystery) with Belief (or adherence to one set of rules, one set of 'facts'). I've only started it, but it's promising.

He points out that Belief thrives on opposition, on conflict. That heroic stands depend on a real or imagined oppressor. This ties in, in my mind, with the notion brought fwd by Lee Harris in his book, Civilization and Its Enemies, where he points out that Jews, Americans, secular people, Europeans, etc. are only stick figures in the self-contained psycho-drama of Islamic Extremism. Carse argues that there is an interrelation of Belief and Counter-Belief, each egging the other on, unable to let things lie, each unable to re-assure itself of its own rectitude without the provocation of the 'Wrong' belief.

Alas, under-achiever that I am, I haven't finished either of these, but need to...! Back to the stacks.
Posted by Old Mr. Still Struggling with Ceaseless Chaos at 12:53 PM No comments:

TOAD LAKE Welcomes You (and a lot of good THAT will do you...)

A Ghostly World in Collision with Yours

Perhaps, like Epictetus, I may say, of the world and its evils,

For the truth is - these evils are normal, they are natural, they are not (in the end) evil at all, just - consequent; and matters of indifference.

Indifferent things I should not be attached to, but am: